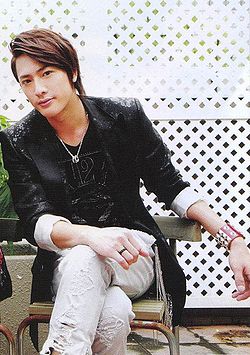 Uchi Hiroki is a former member of Johnny & Associates groups NEWS and Kanjani8.

Uchi Hiroki entered Johnny's Entertainment in April of 1999 when he was 12 years old. He was put into the group Kanjani8 and later was picked to participate in the group NEWS together with Nishikido Ryo. He is known as one of the odder members of NEWS as he always answers questions creatively.

In July 2005, he was temporarily suspended after being caught drinking in public while being under the legal drinking of 20. At that time, Uchi was acting in drama called Ganbatte Ikimasshoi; he was replaced by fellow Johnnys-member, Taguchi Junnosuke of KAT-TUN.

It was announced in January of 2007 that Uchi and Kusano Hironori were off their suspension and instead put in training, receiving the title "trainee". This title is even below "Junior" level so it basically meant that the two of them were going to start from scratch. For many months it was silent but in May it was announced that Uchi, together with Kusano, would star in Shonentai's PLAYZONE 2007 musical. The three members of Shounentai said in an official statement at johnnys-net.jp that they hoped that both Uchi and Kusano would be able to leave the "trainee" status once the shows are over at the end of September.

In January 2008, it was said that Uchi and Kusano Hironori were graduated from their trainee position. As for graduating, Uchi acted in a drama called Isshun no Kaze ni Nare, also starring Nishikido Ryo. Later, he starred the drama Osen. In January 2010 Nikkan Sports reported that Uchi Hiroki will not return to either NEWS nor Kanjani8, he will participate in solo activities from now on.