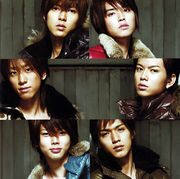 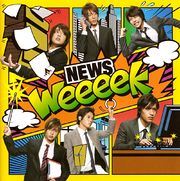 "weeeek" is NEWS' seventh single. The title song was used as the Crymson/RUSS-K CM song. This single was released simultaneously with NEWS' second album, pacific, but it wasn't included on the album tracklist. This single sold 333,856 copies in 2007, becoming the #10 single of the year. It charted for 28 weeks and sold a total of 376,261 copies.