Kato Shigeaki is a member of Johnny's Entertainment group NEWS.

Kato Shigeaki joined Johnny's Entertainment in April of 1999 and was originally part of the unit J-Support a.k.a K.K.Kity with, amongst others, Koyama Keiichiro and Kusano Hironori before he was selected to be in NEWS in 2003. At first, his role was a minor one with little exposure and promotion. After 2006, the group structure changed, pairing him with Koyama Keiichiro and creating the duo KoyaShige. The last member loss effectively dissolved the sub-unit structure of NEWS. With Tegoshi Yuya and Masuda Takahisa as main vocalists and Koyama Keiichiro as leader and spokesperson, Kato took the role of advisor who keeps a level head.

In January 2012, his debut novel “Pink and Grey” was published, which made him the first JE idol to become a writer. Two novels and a short story collection followed. In 2012, ”Pink and Grey” was adapted into a manga; 2016 a movie adaptation followed featuring Hey! Say! JUMP’s Nakajima Yuto in the main role. His short story collection “Kasa wo motanai aritachi wa”(Of ants and umbrellas) inspired the drama of the same name.

Kato pays the guitar, has composed several songs for fellow members as well as all of his own solos. His interest in photography prompted the series “PhotoShigenic”, which ran from 2012 to 2015 in Wink Up. In 2016, he directed the PV for his solo “Escort” as well as some of the video material shown during the QUARTETTO tour.

By 2016, Kato’s popularity had made a significant jump reaching about the same level as Masuda Takahisa’s. [1] 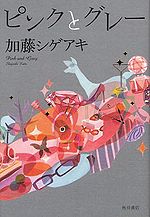 Cover of "Pink and Grey"