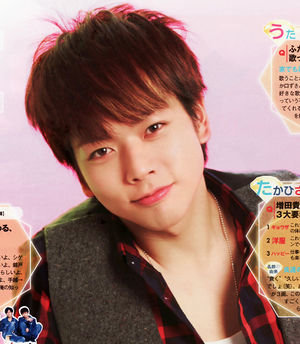 Masuda Takahisa is a member of Johnny's Entertainment group NEWS as well as the duo Tegomass.

Masuda Takahisa joined Johnny's Jimusho in November of 1998. Masuda is known, along with Tegoshi Yuya, to be one of the best singers in NEWS and has many solo parts. Some of his solo songs are the Taiko-drum song, Akatsuki, It's BAD, and Pumpkin. His latest solo is called SUPERMAN. He also participated in the duet piece Sunadokei with Tegoshi Yuya, and in 2006 released a single as a duet with Tegoshi as Tegomass titled Miso Soup, which was also released in Sweden.