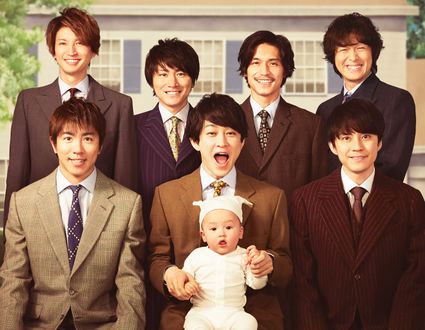 In December, 2002 the group was created out of members of Kansai Juniors. At the time, the 7 members were appearing on the TV program "J³KANSAI" on Kansai TV. In the Kansai area, Kansai TV is on channel 8, so Kitagawa Johnny added another member, Ohkura Tadayoshi, to match the channel number and their unit was than called as Kanjani8 (関ジャニ8). Shortly after their formation, they held their first concert, titled "Kanjani8 Xmas Party 2002" at the Osaka Shouchikuza theater, where they performed their first song as an 8-member group, "Do you agree?"

On August 25th, 2004 they released their first single, Naniwa Iroha Bushi which was first limited to the Kansai area but later (September 22nd) was released nationally as well. The limited-release CD debuted at a record #1 on the Oricon Enka chart, and a #8 on the overall chart. The nationwide release reached #1 on both the enka and overall charts. At this time, the numerical "8" in their name was turned onto its side and made into an infinity symbol (∞).

The members are known for being very close, possibly even the closest in all of Johnny's, shown by their annual barbecues and birthday celebrations together.

In concerts they have been known to dress up as "Kanjani Sentai 8 Ranger" and do skits. Their ranger outfits of course are in their image colors.

In 2005, Uchi Hiroki was suspended from all activities with Kanjani8 due to an underaged drinking incident. Other than a part in the musical PLAYZONE, Uchi had remained away from the public eye. In 2007 he was brought onstage during a Kanjani8 concert where the members welcomed him back as a member of their unit, although there was no official statement at the time.

In January 2008, Uchi Hiroki officially graduated from his "trainee" status. It is uncertain whether Uchi will return as a member of Kanjani8, but in the meantime he will pursue solo activities. Uchi starred in a dorama called Isshun no Kaze ni Nare, along with Nishikido Ryo. 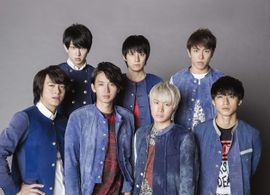 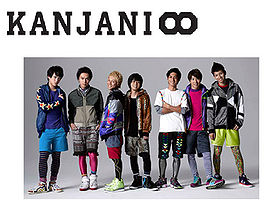 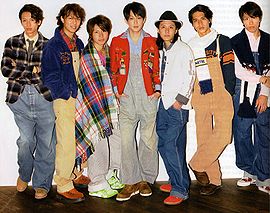 Kanjani∞ in "Only Star" Magazine promoting the "GIFT" single series (2009) 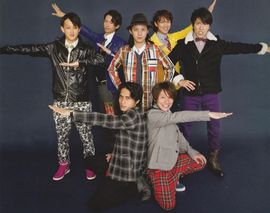