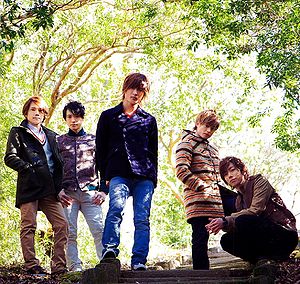 The Acrobat Boys Club was created in 2001 with five members Totsuka Shota, Kawai Fumito, Tsukada Ryoichi, Koshioka Yuki and Yudai Tatsumi. They were dancing with J-Support. In 2002, Koshioka Yuki and Yudai Tatsumi left the group and were replaced with Goseki Koichi. Both boys finished in FM Tokyo, backdancing for Arashi and Tackey & Tsubasa. Later, Tohshin Yoshikazu's group ING Shinkoukei disbanded and he was featured with A.B.C. where they were introduced as Tohshin Yoshikazu & A.B.C. Tohshin isn't an acrobat but the others members consider him as the 5th members of A.B.C. In 2005, after a last performance with A.B.C., Tohshin left A.B.C. and started his new stage play and dramas. In 2006, Totsuka was chosen as a member of a new unit Kitty GYM with Yamashita Tomohisa, Golf & Mike, Yaotome Hikaru, Inoo Kei and Kitayama Hiromitsu. In 2007, they made a big impression with their original song Star Seeker, where the boys choreographed the song themselves, mixing different dance styles, acrobats, sign language, etc.

A.B.C. are especially well known for their backflips, cartwheels, somersaults, dance skills and other things such as backflipping off of raised platforms.

In Summary 2008, it was annouced that Hashimoto Ryosuke, who was a member of J.J.Express would join A.B.C., thus the group name changing to A.B.C-Z. Right after that they held a concert, along with Kis-My-Ft2.

In May 2010 they were allowed to hold their own concert at Theater Crea in Tokyo. It was also the first time they produced their own concert. They had their solo live from May 11th until 19th and then other units from Johnny's Jr. will take part in, and hold four different kinds of show in total until May 31st.

On July 23rd, during the PLAYZONE'11 musical, Kawai Fumito broke his left leg, causing him not to be able to appear for the rest of the show. After PLAYZONE'11 A.B.C-Z was scheduled to be in the stage play Shonentachi Koushi naki Rougoku. Johnny H. Kitagawa was at the opening of this show and revealed a new group of seven, ABC-xyZ, centred around the already exisiting four member group A.B.C-Z. He also hinted that things could get going by 2012, but for that Kawai needs to get better first.

On November 6th they held their first one-man concert at Tokyo’s Yoyogi National Stadium for 26,000 fans. They also announced that in February next year they will be hosting a play, titled “ABC-za Star Kouen”, at Nissay Theater in Tokyo. Johnny H. Kitagawa commented that they may debut the next year.

On December 9th A.B.C-Z held a press conference for their upcoming stage play “ABC-za Star Kouen”. They also announced that they will be debuting in 2012 with a DVD. This would make them the first Johny's to do so. They hoped to release the DVD before the opening of their stage play on February 4th. It was said that the DVD would be released under Johnny's Entertainment.[1] By the end of December the release date, February 1st, 2012, was then made public, along with the content of the DVD.[2]