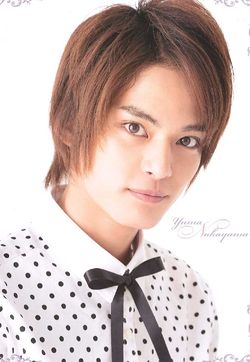 When he joined Johnny's Entertainment in October 2006, Nakayama, along with two other Kansai Jr. Kamiyama Tomohiro and Fujii Ryusei, formed the Kansai Johnny's Jr. unit TOP Kids. In August 2007, after the creation of Hey! Say! 7, the three members of TOP Kids joined with four other Kansai Jr. to make the group Hey! Say! 7 WEST, which acted as Hey! Say! 7's brother group from Kansai. The unit was later renamed Nakayama Yuma w/ Hey! Say! 7 WEST. However, on occasions when Nakayama is not working with this group, the remaining six members carry on with their own activities and are called 7WEST.

Nakayama's drama debut at age 14 was in April 2008 when he starred in the NHK dorama Battery, along with fellow Johnny's Jr. Takada Sho and Morimoto Shintaro. In June 4th 2009, his debut with the Johnny's Jr. group B.I.Shadow as Nakayama Yuma w/B.I.Shadow was announced. They released a single entitled Akuma na Koi which was used as the theme song for Nakayama's third dorama, Koishite Akuma ~Vampire Boy~. In March 2010, Yamada Ryosuke and Chinen Yuuri from Hey! Say! JUMP and Nakayama formed NYC with the debut single Yuuki 100%.

Nakayama's older sister Yamada Nana is a member of NMB48 and former member of SINA.