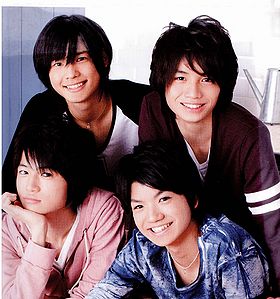 B.I.Shadow was formed in 2008 as a three member group, with Nakajima Kento, Kikuchi Fuma and Takahata Misaki while they acted in the dorama Scrap Teacher ~Kyoushi Saisei~. In March 2009, Matsumura Hokuto joined the group during a Hey! Say! 7 concert.

In May 27th 2009, Takahata Misaki suddenly quit Johnny's. Kochi Yugo was put in the group shortly after his audition.

In June 4th 2009, it was announced B.I.Shadow would debut with Nakayama Yuma as Nakayama Yuma w/B.I.Shadow. It was then announced that they will alco be part of NYC boys to support the 2009 Women Volleyball World Grand Prix, with NYC boys being only a temporary group.

In early 2010 it wac then announced that NYC would make a debut as a 3 membered group, without B.I.Shadow. Nakayama Yuma w/ B.I.Shadow then faded away with NYC's activity and B.I.Shadow still being a Johnny's Jr. group.

2012 Nakajima Kento and Kikuchi Fuma were choosen to be part of Sexy Zone and made their debut. Kochi Yugo and Matsumura Hokuto where then put as Johnny's Jr. without being in any group.