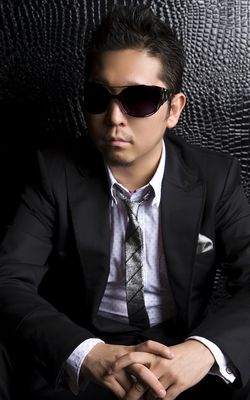 Takahashi Taku (高橋拓) or ☆Taku Takahashi is one-half of the Japanese urban group m-flo. He serves as the unit's composer and producer. Along with bandmate and close friend VERBAL and former group member LISA, Taku formed m-flo in 1999. Outside of the m-flo umbrella, Taku has produced tracks for a number of J-Pop artists, including Crystal Kay, Hinouchi Emi, melody., Suzuki Ami, Rie fu, and MINMI. Takahashi was also a member of avex's 20th anniversary dance music project ravex. He also once had his own record label, Tachytelic Records, which housed Hinouchi Emi, but in 2006 the label ceased to exist. In 2010, Takahashi Taku launched his second record label, TCY Recording, featuring dance music artists. He also began working as a music director, for the Gainax animated series Panty & Stocking with Garterbelt, which aired in October 2010. On March 30th, 2011, Takahashi Taku announced a solo album, a mix CD called "AFTER 5 VOL.1 which combines records of electro, drum 'n' bass, and dubstep.