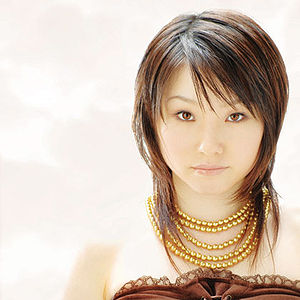 Ohmi Tomoe (近江知永) is a Japanese pop singer and anime seiyuu, who is signed under the evolution record label. She received training from the "Japan Narration Acting Institute" and "RAMS Professional Education". She's produced by Okui Masami after auditioning for her radio show Okui Masami O-live. Now, Ohmi has her own radio show titled, Tomoe Ohmi no 'Su'!. Since the evolution has been terminated, she didn't release any new single or album, and her website is dead, so she finished her own career, but she continues her blog, to inform her fans.