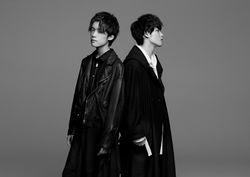 Only this time promoting ANSWER.

Only this time is a Japanese pop duo made up by Takuto and Miyakawa-kun. It was officially formed in 2019, even though the members had previous work together.

Takuto and Miyakawa-kun had previously released a single together, but they weren't a unit yet. They got the opportunity to sing another song as an opening for the anime Meitantei Conan, and they decided to form a unit for their work together.

The name Only this time was proposed by Miyakawa-kun, with the idea that there are things that can only be done in the moment; and they as creators have to take care of what they create.