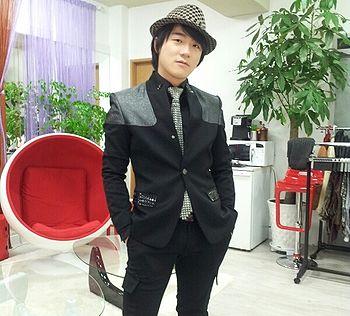 Outsider (아웃사이더) is a K-Hip-Hop artist known as the fastest rapper in Korea with the ability of rapping 17 syllables per second.

Outsider first debut as an underground artist with the EP Come Outside in 2004.

He released his first single "Speed Star" in 2006 and promoted the title track "Motivation" on the SBS variety show The Truth Game with host Yoo Jae Suk which lead to him being scouted by fellow K-Hip-Hop artist MC Sniper and was soon signed to his label Sniper Sound.

In 2007 Outsider released his first full length album Soliloquist with the lead single "Namja Tapke". He released his second album Maestro in 2009. Promoting the title track "Oetori" the album charted well, taking the #1 spot for 5 weeks.

The digital single "Jubyeonin" was released in March 1st, 2010. The single was a teaser for his second mini-album, The Outsider, released the following day.