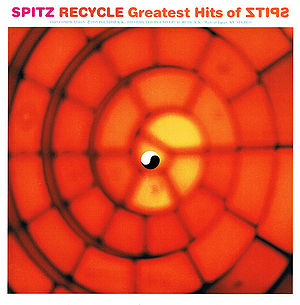 RECYCLE Greatest Hits of SPITZ is the first best album released by Spitz. First press edition comes housed in a cardboard folder. The album compiles the group' singles A-sides (or first A-sides) since their seventh single, "Kimi ga Omoide ni Naru Mae ni", to their 19th, "Kaede / Spica", in release date order. The album was released without the group consent, hence it doesn't appear listed on their official website. The album reached #1 on Oricon weekly charts, and charted for 238 weeks (around 4 1/2 years). As it sold 1,660,140 copies in 2000 it become the #7 album of the year. In January 2006, the album production was discontinued, and by that time it had sold around 2,200,200 copies.