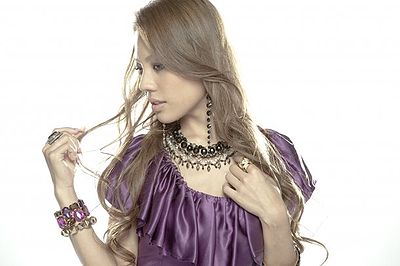 SATOMI' is a Japanese pop/R&B singer. She is currently signed to Aozora Records in Japan and Hiptones in the United Kingdom.

Satomi (nicknamed 'Satton') was born on March 7, 1989 in Yamaguchi, Japan. She started her dancing lessons at the age of 3. In 2003, at the age of 14, she started singing when her dancing teacher asked her to join a vocal training program. As soon as autumn of the same year she was signed to management, and in February 2005, "Love Shouts" was pre-released exclusively in the Kyushu area where Satomi was based.

In January 2005, at the age of 15, she was chosen to perform live at MIDEM, after beating many established names in Japan. This live performance was documented in a national newspaper and has been the center of attention of the Japanese media ever since.

As the first artist to be released on the Hiptones label, and under the guidance of the people behind UK's legendary Creation label, Satomi was able to work with UK's leading producers. This led to her showcase at the world famous venue Ronnie Scotts, in front of more than 100 people from the UK media in May 2005, making her, at the age of 16, the youngest and possibly first ever Japanese artist to be solo showcased in the UK. Her performance was well received, and in June 2005, "Toxic Love" was pre-released in a vinyl only format.

In 2006, Satomi debuted in Japan as SATOMI', releasing her first double a-side maxi single "Yesterday / Love to stay" in February. Satomi continued to release and record tracks in both the United Kingdom and Japan in early 2006. It was not until the release of her third double a-side maxi single, "Orange canvas ~Aki no Sora no Shita de~ / Fairy's stick", that Satomi made the Oricon top 100 charts, debuting at #81.

Satomi released her first Japanese full album, "Diamondlily", in February 2007, jumping to the #15 spot on its initial release day.

In 2011 she changed her name to SATOMi and released two more albums, chainin' and Tick.