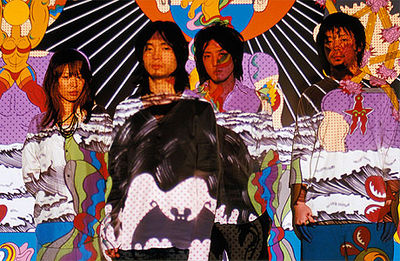 SUPERCAR (スーパーカー) was an experimental Japanese rock band under Sony's Ki/oon Records. The debut in 1997 with a powerful avant-garage rock sound, but as the years went on the band moved to more of an electronic sound.

In 1995, Furukawa Miki put an ad in the a local Aomori newspaper stating "musicians wanted". Ishiwatari Junji replied to the ad and soon invited his long-time friend Nakamura Koji to join as well. The two boys then brought in Tazawa Kodai, who was a friend from junior high school. They all started writing and recording and were soon offered a record deal by Sony Music Entertainment and signed under their Ki/oon Records sub-label.

In September of 1997, the band made their debut with the single, "cream soda". Both it and their second single, "Lucky" failed to chart on the Oricon charts. It wasn't until the bands third single that they started to rank onto the Oricon.

The band gain minor success until the release of their second album, JUMP UP, which exploded onto the music scene in March of 1999. The band continued releasing successful music, and ended off 1999 with the two albums OOYeah!! and OOKeah!!. After that the band's releases started experimenting heavily with electronic music.

The band broke up in early 2005. Since then Nakamura Koji and Furukawa Miki have gone on to start solo careers