Salamander Guru and The Shadows 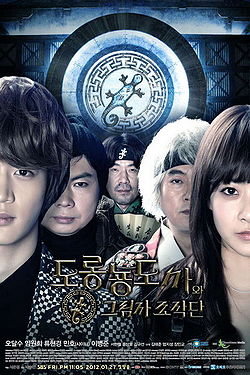 poster "Salamander Guru and The Shadows" (2012)

Genius hacker with social phobia Min Hyuk, whose father is a computer genius, played with a computer like a toy from when he was little. He grew up learning hacking skills through his dad who was terminally ill and ran an illegal gambling place for his family’s future. After his dad passed away, Min Hyuk was adopted abroad. He immersed himself in playing with computer and got social phobia. When he turns 20, he returns to Korea and starts chasing the guy X who drove his dad to death. Following clues from his memories, he finds Salamander Guru’s fortune telling house and meets Sun Dal and Won Sam. To find Salamander Guru who knows the secrets of X, Min Hyuk has no choice but to help the fake gurus. With his brain and excellent hacking skills, Min Hyuk controls Sun Dal behind a mirror and finds codes his dad left by recalling his childhood memories one by one. Min Hyuk, who has been secretive with social phobia, gradually becomes more open while living with Sun Dal and Won Sam.