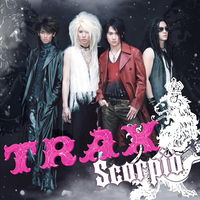 "Scorpio" is TRAX's Japanese debut single. The single was released simultaneously in Korea (with Korean versions) as their second single, with the addition of two tracks. The song "TEARS "TRAX version"" is a cover of X JAPAN's song of the same name, and it was included on the Japanese soundtrack of the Korean film Windstruck. The song "Beat Traitor", was used as theme song for the Korean release of the film Cube Zero. The Japanese edition reached @28 on Oricon charts and charted for 5 weeks.