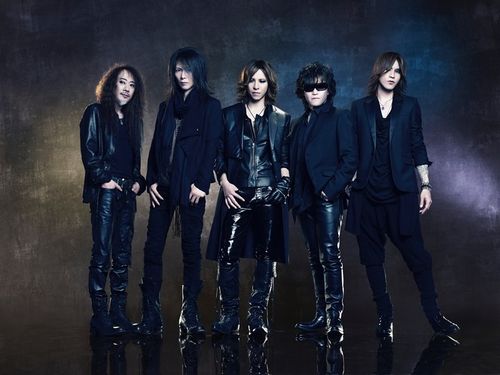 X JAPAN or X is a Japanese visual-kei band formed by YOSHIKI. Their sound started as Japanese rock speed metal, and later went toward alternative rock, but always with a huge emphasis in ballads. 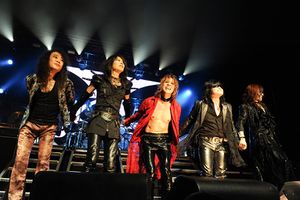 X JAPAN during a concert at their North American Tour (2010)

Plans for the band started in 1976, when its original members, TOSHI and YOSHIKI, were only 11. The band's first name was NOISE, later on changing to X in 1983.

Between 1976 and 1987, many people entered and left X, but its most famous formation was already in place when the band went major in 1987, with the release of their first single "Orgasm". The members at that time were: YOSHIKI on drums and piano, TOSHI on vocals, hide, PATA on guitar and TAIJI on bass. No record labels would sign the band because of their transgressive way of dressing and performing. Not to be stopped, YOSHIKI created his own record label, Extasy Records, with money he and his mother helped provide by selling the family business.

In 1992, X was widely known in Japan, and they intended to start focusing in America. In US there was already a band called X, so they were forced to change their name to X JAPAN. A little before changing the name one of the many arguments that used to take place between YOSHIKI and TAIJI led to TAIJI's departure of the band. TAIJI'S last three live performances were Tokyo Dome 3 DAYS ~Hametsu ni Mukatte~. He was replaced by HEATH later in that same year.

After leaving, TAIJI worked with LOUDNESS, D.T.R., and Cloud Nine for a while, and is now in another band with his little sister on vocals, Otokaze. They performed at hide's birthday celebration on December 13, 2004, and TAIJI covered hide's "ROCKET DIVE" as well.

X's music, under the caring but determined supervision of YOSHIKI, never stopped evolving. Amongst their music one can find songs for everybody: harsh but very emotive speed metal tracks like "SADISTIC DESIRE", "Phantom of Guilt" and "VANISHING LOVE"; even more acclaimed ones like "KURENAI" and "Silent Jealousy", moving piano ballads like "Forever Love" (ending theme for the anime adaption of X) and "Tears"; and alternative yet powerful tracks like "DAHLIA" and "Rusty Nail". One particularly notable song was "ART OF LIFE", a carefully crafted piece that was almost half an hour (28:56) long and that the band played twice, both during their X JAPAN RETURNS shows in December 30 and 31, 1993.

Almost all X JAPAN tracks were composed by YOSHIKI with a handful of pieces composed by hide and even some early ones by TAIJI. YOSHIKI loved classical music, and this influence can be specially noted in tracks like "ROSE OF PAIN", "ART OF LIFE" or his symphonic composition "Amethyst". He led a project called Eternal Melody which consisted in X's songs rearranged by George Martin and other arrangers for classical performance. The double album, performed by the London Philharmonic Orchestra, was released in 1993. YOSHIKI also selected some classical pieces for two compilations called YOSHIKI Selection and YOSHIKI Selection II. He also remade the song "Black Diamond" by KISS into a classical piece that listed in 1994's Tribute -KISS MY ASS- album, a tribute to the aforementioned band.

In May 1997, TOSHI, shocking the fans, announced he was leaving the band, which led to its dissolution in 22nd September 1997. TOSHI then joined a kind of cult, related to nature and music therapy, lead by a man called Masaya. Many say that this cult influenced TOSHI'S departure of the band. After that, he continued his solo career, saying that his friend Masaya was a inspiration for his new compositions. TOSHI himself alleged he was becoming frustrated by the excessive work demanded by the band, and couldn't do what he wanted to do; so to avoid disappointing the other members and the fans, he decided to leave. He has also said that he hadn't enough time for his family and he just couldn't sing anymore YOSHIKI's sad and touching songs.

After the dissolution of the band, hide continued his very successful solo career with his band hide with Spread Beaver, PATA performing with him sometimes.

Posterior to these events, it is said that YOSHIKI and hide were secretly planning to resurrect X in 2000, sans TOSHI, looking for a substitute singer. In the very last case hide would be both, the singer and the guitarist. These plans were tragically scrapped when hide died on May 2, 1998. He was found in his apartment early on May 2, 1998 after a typical night out of hard drinking. He was found hung to a doorknob by a towel at 7:30 am. hide died on the road to the hospital. This news stunned Japan's youth: four fans around the country attempted suicide, two of whom died. A lot of speculation about his death has taken place, but no definitive explanation has been found. An apparent suicide, it's thought to be an accidental death, but there is not a clear motive for either suicide or murder. Following hide's death, YOSHIKI entered in a depressive state for almost three years, being unable to compose or play.

In late 2000, YOSHIKI recovered, and announced the creation of his new project, Violet UK, a project involving music, visuals, mode and art. In 2002 he produced and starred in three commercials for 7-11, using some Violet UK music and concepts for those. However, up to date, not much else from Violet UK has been shown or released. In 2002 also, YOSHIKI announced he was joining the Japanese pop band globe, to help his long time friend Komuro Tetsuya (in 1991, YOSHIKI, on drums, and Komuro, on keyboards and vocals, did a musical collaboration under the name of V2, releasing a single and performing one live concert). Currently YOSHIKI is working with his new project, S.K.I.N., with famous Japanese musicians Gackt, SUGIZO, Miyavi and Ju-Ken.

As a side note, Japanese Prime Minister Koizumi Junichiro has said that he is a big fan of X JAPAN and that his favorite song is "Forever Love", which helped create his image as a different type of politician more in touch with average Japanese citizens.

News has been posted both at YOSHIKI's official blog as well as at TOSHI's website that plans are underway to re-form the band.

The reunion was officially confirmed on June 4, 2007. The band had its first live performance since nearly 10 years on October 22, 2007, on the rooftop of a shopping center called Aqua City in Odaiba, Tokyo. It was to film the PV for their new digital single called "I.V.", written by YOSHIKI and recorded by all living members of the band it uses unreleased music samples by hide. This song is also used as the main theme for the horror movie Saw IV all over the world. On July 17, 2011, Taiji died after attempting suicide.