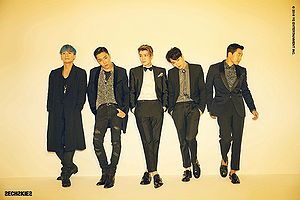 Sechskies or 6kies (젝스키스) is a South Korean male idol pop group popular in the late 1990s formed under Daesung Entertainment. Their name "Sechs Kies" is supposed to mean "six crystals" (representing the six members) although "Kies" actually is translated as gravel in German. They are also affectionately referred to by fans as "Jekki". In May 2016, the group with the exception of Ko Ji Yong, signed a contract with YG Entertainment, making their comeback for the first in 16 years.