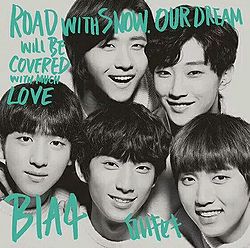 "Shiroi Kiseki" is the fifth Japanese single released by B1A4. It was released in three editions: two limited CD+DVD editions and a regular CD only edition. Both limited editions and first presses of the regular CD only edition includes an application ticket for an event, one different type per edition. First press of the regular edition also includes a random (1 of 3) trading card. The single includes Japanese versions of the songs "WHO AM I," originally released in Korean on their second Korean album WHO AM I, and "Mul Hanjan", originally released in Korean on their fifth Korean mini-album Solo Day.