From generasia
(Redirected from Signal)
Jump to: navigation, search 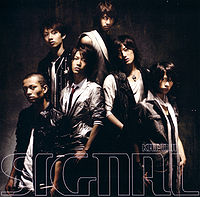 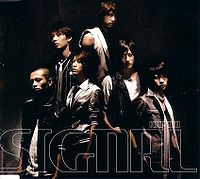 "SIGNAL" is KAT-TUN's second single. The title track was used as the CM song for the NTT DoCoMo New 9 Series cellphone. The single was released in two versions: a limited edition with a DVD and a regular edition. Within the first week, "SIGNAL" sold more than 450,000 copies, which makes them the second artist to break the record of selling more than 400,000 copies for the second single after Utada Hikaru. The single reached a peak position of #18 on the Global Track chart in week 31 of 2006. It sold 566,719 copies in 2006, becoming the #5 single of the year. It charted for 23 weeks and sold a total of 569,527 copies.