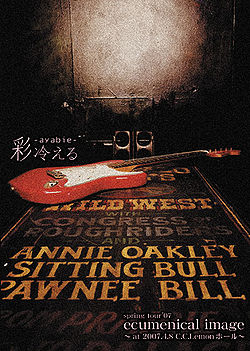 "spring tour '07 ecumenical image ~at 2007.4.8 C.C.Lemon Hall~" is the fifth live DVD released by Ayabie. As the title says, the concert was filmed at the "ecumenical image" tour final at C.C.Lemon Hall on April 8th, 2007. The single "ecumenical image" was distributed to all attending this live. It was first released in Japan, but a month later it was released in Europe through CLJ Records. That version comes with English and German subtitles, and an extra booklet with lyrics translated in English and transliterated in Romaji. The DVD reached #148 on the Oricon chart, where it charted for a week.