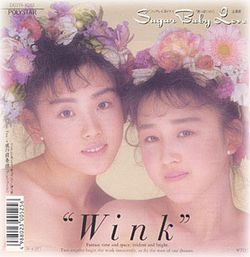 "Sugar Baby Love" is the debut single released by Wink. The title track is a cover of the same-titled song by the English pop band The Rubettes. Also, the title track was used as an opening theme for the Fuji TV dorama Netsuppoi no!. The single reached #20 on the weekly Oricon chart and charted for eleven weeks, selling 61,000 copies.