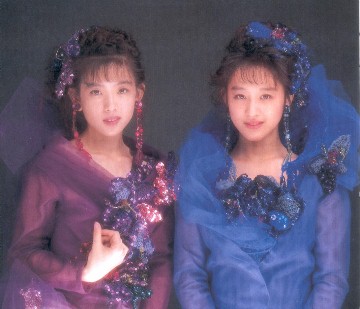 Wink was a popular Japanese pop female unit in the late 1980s. Their first hit single, Ai ga Tomaranai ~Turn It Into Love~ was a cover of Kylie Minogue's "Turn It into Love". The duo managed to stay together through the mid 1990s releasing several albums. They disbanded in 1996.

WINK was formed in 1987 when Suzuki Sachiko and Aida Shoko won the grand prix for the Wanibooks and Up to Boy's Miss Contest. The group got the name Wink when the music office first then suggested "Kirakira Kagayaku" and then the English equivalent, "Twinkle", where they found the group's name, Wink, in the middle of the word.

The duo's first single, Sugar Baby Love, was on April 1988, a cover of the same song by The Rubettes. They didn't get a hit single until their third single, Ai ga Tomaranai ~Turn It into Love~, which helped to popularize eurobeat in Japan. Their other and only orginal single, Samishii Nettaigyo, was also a hit song that sold over a million copies. Both singles helped Wink to win awards at the 22nd Annual Japan Record Awards and a sport at the end of the year program Kouhaku Uta Gassen.

In 1996, the duo would announced that Wink would be disbanding in order to let the girls focus more on their solo careers. Suzuki would go on to become an actress while Aida would go on a tarento. But, the girls has reunited several times especially at the end of 2008 to help the 50th anniversary of the Japanese Record Awards.