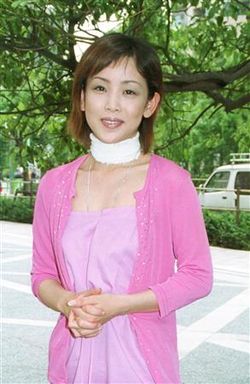 Suzuki Sachiko (鈴木早智子) is a Japanese pop singer, tarento, actress, and one half of the unit Wink.

Suzuki Sachiko first auditioned in 1986 for the 1st Annual "Lotte CM Idol wa Kimi da!" audition but lost to Tachibana Risa. But Suzuki didn't give up as she later auditioned and won the grand prix with Aida Shoko for the Wanibooks and UP TO BOY contest in 1987. She and Aida went on to form the duo Wink that lasted until 1996 and sold over a million copies with their catchy tunes.

After Wink disbanded, Suzuki would go onto to start her own solo music career. To prepare for the release of the single "INNOCENT SKY ~Kanashimi mo Todokanai Ano Sora no Mukou he~", Suzuki went to New York for voice lessons under a dare by the television program Asayan.

She released her second album, Rei ~re-generation~, in 2003 and follow up with a live concert a year later. In 2008, she and Aida reunited as Wink to perform their hit song, "Samishii Nettaigyo", at the 50th Annual Japan Record Awards.