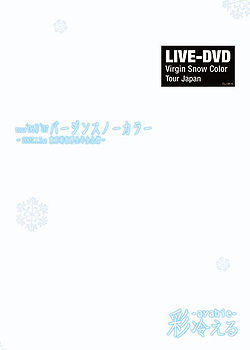 "tour '06>>'07 Virgin Snow Color" is the fourth live DVD released by Ayabie. The second DVD was only available to those who bought it through Ayabie's fanclub. It was filmed on January 7th, 2007 at Tokyo Kousei Nenkin Kaikan. The single "Garasu Saiku no Ohanashi" was distributed to all attending this live. It was first released in Japan, but about a month later it was released in Europe through CLJ Records. That version comes with English and German subtitles, and an extra booklet with lyrics translated in English and transliterated in Romaji.