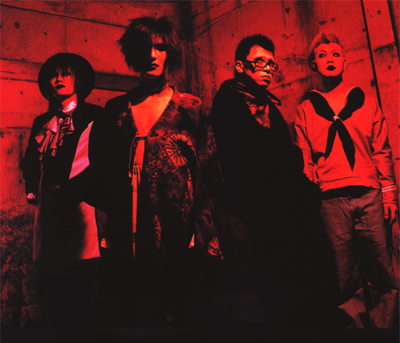 Over the years, cali≠gari has gone through many member changes, the only original member remaining being Ao. They've also had two vocalists by the name of Shuuji - the second one joined the band in 2000.

cali≠gari took their name from an old horror film, and they are considered to be the pioneers of the eroguro genre (a subset of angura-kei) that includes such bands as MUCC and Merry.

Since their disbandment, Ao and Makoto had been working on a project called lab.. (under the names of KUON and KJUN), Ishii Shuuji is working on a band called goatbed, and Kenjirou began with a solo project called MAG-NET, but has joined the current incarnation of SEX MACHINEGUNS as Samurai.W.Kenjilaw. In late 2004 Makoto left lab. to continue work with his band cyanotype. He is still playing support drums for goatbed. In 2010 Ishii Shuuji joined XA-VAT.

Ao is also reputedly friends with FULL of GUNIW TOOLS/Nookicky and Ryutaro of Plastic Tree.