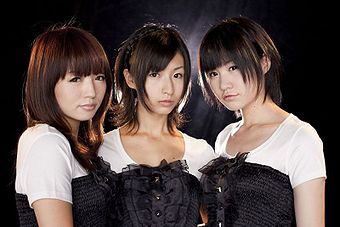 cosmeticROBOT (コスメティックロボット) is a young Japanese electro-pop and idol unit from Tokyo. They debuted as an act in May of 2008 at Shibuya DUO and signed with indies label Cheer-Music. The group is managed by Sweet-Kiss Promotion and has no official website, but releases information through their Ameba blog and MySpace. It July of 2010, it was announced that the unit will be dissolving so the girls can go back to school.

cosmeticROBOT, known as cosROBO (コスロボ) by fans, was formed sometime before the second quarter of 2008 with (at the time) 19 year old Hashimoto Ami, 17 year old Inatomi Naho, and 14 year old Shinga Ayumu; who all appeared together in BOMB! magazine. The unit debuted and had their first live on May 10th, 2008 at Shibuya DUO. Five months later they held their first one-man concert at Omotesando FAB on October 5th. Exactly one month later cosmeticROBOT released their debut single "Serial Number 99". The single would reach #9 on the indies Oricon charts and #145 on the major weekly charts. In July of 2010, it was announced that cosmeticROBOT was dissolving because of the girls going back to school.

cosmeticROBOT cites Perfume as their idols, and lists them along with Nakata Yasutaka (with other acts associated/produced by him) as their musical influences.