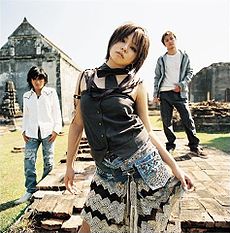 day after tomorrow was a three-piece pop group under avex trax label. It consisted of misono, Suzuki Daisuke and Kitano Masato, with the latter two taking charge of the songwriting, and was produced by Igarashi Mitsuru.

Having formed in the early months of 2002 with their first single in August of that year, the band produced songs extremely quickly with one live tour, two mini-albums, three full albums, and eleven singles all within three years' time. The group was one of the winners of last years Japan Gold Disc New Artist of the Year Award proving that the they are definitely one to watch for. The band has uplifting songs as well as strong ballads, and having a keyboardist instead of a bassist or drummer, as is typical in other groups, also helps give the group a unique sound.

The band has announced that they will officially disband after releasing a Best of album this summer. misono will go on with a solo career while Kitano Masato and Suzuki Daisuke will continue writing and composing songs for other artists.

On August 1, 2006, avex announced a third best album to be released on September 20th. For this album, the tracklist was based on selections made by the fans.