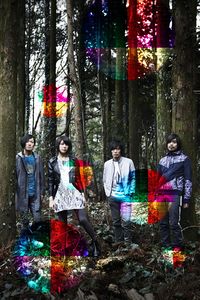 School Food Punishment (formerly school food punishment) is a Japanese pop, rock, and ambient fusion band that formed in October of 2004 and is signed to Sony Music Entertainment. In December of the same year they had their first live concert in a metropolitan area, and in May 2005 they released their first demo album on a CD-R. Three months later in August they performed at an event sponsored by another band, six o'minus.

In 2009, they signed with EPIC Records, a Sony Music Entertainment sub-label, and made their major debut with the single single "futuristic imagination", which was used as the ending theme song for the anime Higashi no Eden. The following summer, the band flew to Paris to perform at Japan Expo in front of thousands of people.

In 2010, for the anime's second theatrical release, Paradise Lost, the band provided the opening and closing themes using the songs "future nova" and "after laughter", respectively (the songs are from their fifth and first double A-side single "future nova / after laughter"). In April the band released their major debut album, amp-reflection.