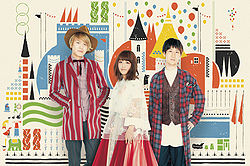 They are a Kansai born, male-female double vocal three-piece band. Their music style uses a mix of rock, electronica, and shoegaze pop. Their first single "White Raincoat Man" was released in April 2013 as a limited Tower Records edition. The single won second place in the Oricon weekly indies chart.