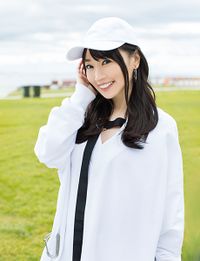 Mizuki Nana (水樹奈々) is a Japanese pop singer and a popular anime seiyuu under the KING RECORDS label. She was the winner of "Best Musical Performance" in the first annual Seiyuu Awards. She is also the record-holder for the highest ranking seiyuu album and single on the weekly Oricon chart, the first seiyuu to put two singles in the Oricon weekly top3 simultaneously and the first seiyuu to hold a concert at Tokyo Dome.

Mizuki was born and raised in Niihama, Ehime, Japan. She was trained as an enka singer, and made her debut as a voice actress in 1998. Her prominent roles include Hinata Hyuga in the long-running ninja series Naruto, Fate Testarossa in Mahou Shoujo Lyrical Nanoha, Tsubasa Kazanari in Zenki Zesshou Symphogear, Moka Akashiya in Rosario + Vampire, and Cure Blossom in HeartCatch PreCure!.

She released her debut single, "Omoi", under the King Records label on December 6, 2000. A year later, she released her first album, supersonic girl, on December 5, 2001. In the years that followed, Mizuki enjoyed modest success that concluded with the release of her single "innocent starter", which reached the top 10 Oricon singles chart, charting at #9. Since then, Mizuki's releases have charted steadily higher in Japan, establishing her as a successful singer in the country. On June 3, 2009, her album ULTIMATE DIAMOND reached #1, her first release to do so; while her single "PHANTOM MINDS", released on January 13, 2010, also charted at #1. Mizuki is the first voice actress to top the weekly Oricon albums chart and the weekly Oricon singles chart since its inception in 1968.

Her 13th studio album, CANNONBALL RUNNING, is released this week on December 11th.