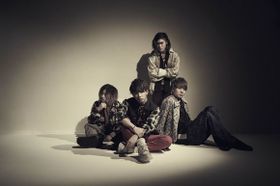 MY FIRST STORY is a Japanese rock band from Shibuya, Tokyo signed to INTACT RECORDS. The band was formed in 2011 and is often referred to as "MFS" or "MY FIRST" (マイファス). Having known Hiro through Pay Money to My Pain's vocalist K, producer Outani Nori suggested him to Sho in August 2011, when he was still mainly active in his previous band Fromus together with drummer Masack and bassist Nob. Only a little later, the newly founded formation decided to add another guitarist and Hiro remembered Teru, whom he had already tried to start a band with in their highschool days. Their band name had been suggested by PTP vocalist K.

On April 4, 2012, eight months after their formation, they released their first full album, the eponymous MY FIRST STORY, that by 2013 had already sold 20,000 copies. The album caught people's attention and put them in lineups of major music festivals like the Summer Sonic Festival, which the attended that August. The band's first independent show, "HIGHEST LIFE PARTY Vol. 1", held in June, sold out immediately. Their second tour in 2013 following their second album THE STORY IS MY LIFE, sold out at every venue. They also appeared in several music festivals such as Punkspring, Rock in Japan Festival, Summer Sonic Festival, and many more.

Towards the end of 2015, guitarist Sho would take a hiatus due to personal circumstances. Despite no longer appearing on stage with the band, he remains present in their following albums, credited as composer or sound producer. In March 2016, drummer Masack announced his withdrawal. Kid'z, formerly of the recently broken up band Loth, joined as the new drummer after he had already been friends with both Hiro and Teru. On June 29, 2016, they released their fourth studio album ANTITHESE. The album ranked #4 on the Oricon chart and directed their first Nippon Budokan live show, gathering 12,000 people.

Since then, MY FIRST STORY has had tie-in tracks for various media, including "Let It Die" for the eponymous PS4 game Let It Die, "Reviver" for the Sega mobile game Hortensia Saga: Ao no Kishidan, and "Smash Out!!" for the film Shinjuku Swan II.