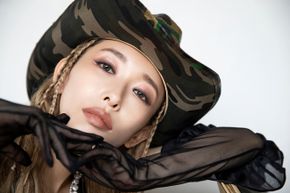 Kato Miliyah (加藤ミリヤ) is a Japanese urban-pop singer-songwriter and fashion designer. She is under the MASTERSIX FOUNDATION sub-label of Sony Music Entertainment. She debuted back in 2003 as a featuring artist and started her solo career with, "Never let go / Yozora" in 2004. The single reached the #15 position on the Oricon charts. At the time of her debut in she was called the "post-Utada Hikaru", referring to the two artists' similarities, from their lyrics to their shared "high school girl charisma".

Her debut studio album, Rose was a big success reaching #2 on the Oricon charts and making it into the top 100 albums of the year. Her total sales in Japan, both physical, digital and ringtones, are over 12.6 million copies.

Her first tribute album INSPIRE is released this week on October 28th.