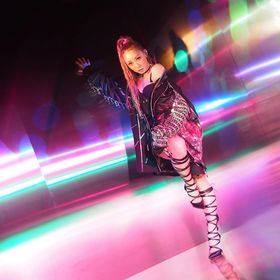 Koda Kumi (倖田來未) is a Japanese pop singer from Kyoto. She made her debut through avex trax's sub-label rhythm zone in late 2000 with the single "TAKE BACK", though it wasn't until 2002 that she released her debut album, affection. Since the release of her first best album BEST ~first things~ in 2005, her popularity has grown considerably. Other factors such as her appearance on the Japanese soundtrack of Final Fantasy X-2, her "ero-kakkoi" image, and her "12 Days of Christmas" wide-scale release of one single every week from December to February (2005-2006) had all contributed to her increase in popularity.

She has also won many fashion awards such as, the "Best Jeanist Award" and the title of "Nail Queen" yearly since 2006. Since the rise in her popularity, Koda has lent her face and songs to many advertisements. In 2006 and 2007, Oricon named Koda as the top selling artist of the year. Jonathan Ross has called her the Christina Aguilera of Japan, while many also compare her career to that of Britney Spears. Koda has sold more than 15 million physical records in Japan alone, making her the 18th best selling solo Japanese female artist of all time.