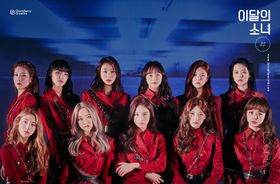 The group was first revealed at the end of September 2016. Set to be a 12-member group, one new member would be revealed per month until their debut in 2018, corresponding to their Korean name Idarui Sonyeo, or "Girl of the Month". Each new member revealed released a solo song and sometimes also a new song with members who have already been revealed. For their solo releases, the first five members traveled to locations such as Paris, Tokyo, Iceland, London, Taiwan, Hong Kong, New Zealand, and Prague for their promotions. Three sub-units were also revealed before their debut: LOOΠΔ 1/3, ODD EYE CIRCLE, and yyxy.

On August 7, 2018, LOONA released the digital single "favOriTe" as the lead-in single for their full debut. They held their debut concert "LOONAbirth" on August 19th and released their debut mini-album + + (Plus Plus) the following day.

Their second mini-album, [#] (Hash), is released this week on February 5th.