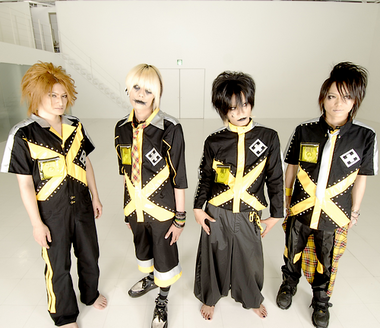 metronome (メトロノーム) is a three to four member (at any given time) Japanese electronic-rock band of the angura-kei variety under the independent label ART POP ENTERTAINMENT. The band's line-up changed a number of times since their formation in August of 1998, with Sharaku and Fukusuke being the only original members. metronome said that they had travelled through time from the year 2005 to 1998 in order to improve their record sales, hence the futuristic themes.

In February of 2009, the group announced that after their spring one-man tour Please Push Pause finale at Shibuya C.C.Lemon Hall on May 31st, they would be "shutting down", i.e. be going into an indefinite hiatus. Since the pause, Sharaku has been busy with the groups FLOPPY and Cuckoo, Fukusuke has his solo project ADAPTER., while Riu joined the band MaitoreiA, who then disbanded in April of 2010.

The band would resume activities in 2016.