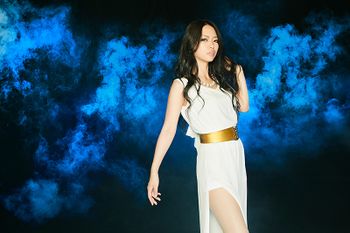 miyako is a Japanese guitarist for the band 21g and the duo SONIC LOVER RECKLESS, and the guitarist and keyboardist for the all-female metal band LOVEBITES.

Miyako had an interest in music since her childhood and started learning the piano at the age of 3. She played piano as a young girl and was immersed in classical music during high school. The most influenced composer for her during this time was Rachmaninoff. During the summer when she was 18, she picked up the guitar for the first time, and she learned guitar in full swing after entering university. Because she had a background in classical music, she tried to master the guitar by herself, and used the textbook series "Jigoku no Mechanical Training". While learning the classical esoteric phrase of heavy metal, she learned about guitar heroes such as Yngwie Malmsteen and Paul Gilbert and metal bands such as Metallica.

At the age of 20, she joined the band GoDeath with an acquaintance and started band activities. The band decided to drop their Visual-Kei look and renamed themselves a DROP OF JOKER in 2013. Miyako performed not only as a guitarist for the band but also as a composer and was arranging all songs.

While acquiring musical experience with a DROP OF JOKER, she joined ex.SIAM SHADE NATCHIN's newly formed band 21g in 2014.

Later in 2015, while performing lives in Tokyo, Miyako joined the metal band LOVEBITES as a support member. She joined the band as a full member in 2017.

In the spring of 2017, Miyako formed a female duo unit SONIC LOVER RECKLESS with Kamiki Aya for which NATCHIN serves as the music producer.

In April 2018, she changed her stage name from "mi-ya" to "MIYAKO" for her solo projects, 21g, and SONIC LOVER RECKLESS, and to "miyako" for LOVEBITES.