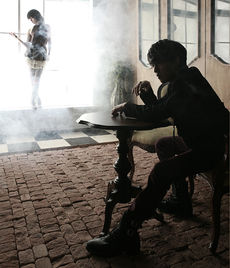 nadia (나디아) is a Korean Pop/Electronic mixed duo debuted in 2009 under Purple Communications and SM Entertainment. As Hwang Hyun began involved in other projects and as mid 2012 the duo has not made yet their comeback it's safe to assume that they had unofficially disbanded.

nadia was presented to the public through a video on SM Entertainment's official YouTube channel. On the video nadia performed a live slow paced cover of KARA's Mister. Three days after the release of the cover, on October 18, 2009, nadia released their debut digital single "Twinkling Boy". Only two days later, they released their self-titled first mini-album. On the following month, nadia released a couple more of digital singles. All the songs included on their three first digital singles were already included on the mini-album, their only psychical release until the date.