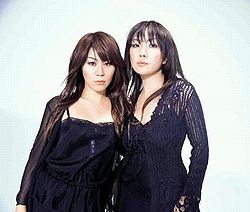 r.o.r/s (reflection of renaissance/sounds) was a short-lived Japanese pop duo in 2003.

r.o.r/s debuted with the song "CRY-MAX" which was used as the theme song for the TV program DRIVE GO!GO!. Their best known songs are "Tattoo Kiss" and "escape" which were used as the 3rd opening and ending song for the anime Kaleido Star. They released only one album and two singles before disbanding.