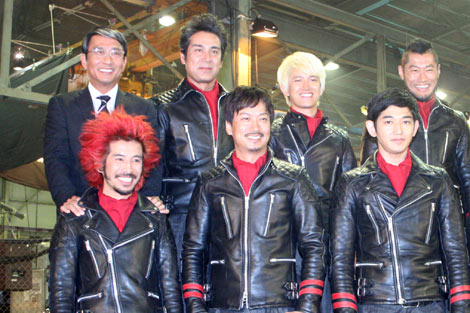 The complete main cast of the “Wild 7” movie adaptation was uncovered on Monday during an on-location press conference in Kawaguchi, Saitama. It was previously reported that the film includes lead actor Eita and Kanjani8 member Maruyama Ryuhei as two of the titular group of outlaws, but it is now known that the rest are being played by Shiina Kippei, Abe Tsuyoshi, Ukaji Takashi, Hirayama Yusuke, and Matsumoto Minoru.

Also joining the cast is Fukada Kyoko, who will play the story’s heroine as Yuki, a mysterious woman working as a sommelier at an Italian restaurant. Her character is said to be an important one, holding the key to the story.

As explained in previous reports, “Wild 7” is based on an action manga by Mochizuki Mikiya from the 1970s, telling the story of a motorcycle-riding group of former convicts (the “Wild 7”) who get selected by the police to combat terrorists and other criminals. Nakai Kiichi will be playing the police superintendent who oversees the group.

Kaname Jun and Motokariya Yuika have been cast as newspaper reporters chasing after the incidents that the “Wild 7” are involved in. Yoshida Kotaro plays an official with the Public Security Intelligence Agency.

The film has now been given a release date around the start of 2012.