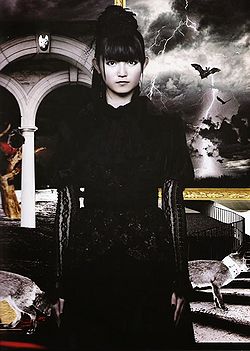 Nakamoto Suzuka (中元すず香) is a Japanese actress and singer under the agency Amuse. She a former member of the idol groups Karen Girl's and Sakura Gakuin. Although she has graduated Sakura Gakuin, she will still be the leader and main vocalist of its sub-unit BABYMETAL.

Before her professional debut, Nakamoto was a student at the Actors School Hiroshima (ASH), whose graduates include Perfume. It was at ASH that Nakamoto met Sugimoto Mariri, who would join Sakura Gakuin as she also would, for the first time. In 2003, she won the Grand Prix Award for the "Bandai Jewel Drop Image Girl Contest". After that, she also won the Grand Prix Award at "Amuse's 2nd Annual Star Kids Audition" that started Nakamoto's career.