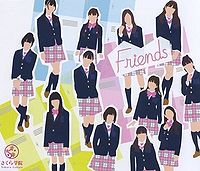 "FRIENDS" is a special single released by Sakura Gakuin. This was released only at certain venues where they performed. The song was later released on their second album Sakura Gakuin 2011 Nendo ~FRIENDS~.