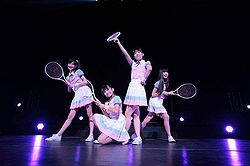 Pastel Wind is a sub-unit of the Japanese idol group Sakura Gakuin. They are the sixth Sakura Gakuin sub-unit to form, following Twinklestars, BABYMETAL, Minipati, SCOOPERS, and sleepiece. The group first appeared Tokyo Idol Festival 2012 on August 4 and 5, 2012. Their debut song "Scoreboard ni Love ga Aru" (スコアボードにラブがある) is on Sakura Gakuin's 3rd album Sakura Gakuin 2012 Nendo ~My Generation~. On May 5, 2013, Horiuchi Marina left the group and Ooga Saki joined in her place. Leader Sugisaki Nene also left the group after her graduation on 30th March 2014. THe unit later became inactive.