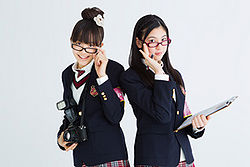 SCOOPERS is a sub unit of the idol group Sakura Gakuin. They are the fourth sub unit to debut from the group, following Twinklestars, BABYMETAL, and Minipati. The group first appeared on Sakura Gakuin's debut album Sakura Gakuin 2010 Nendo ~message~ in April 2011, performing the track "Brand New Day". Since both members have graduated, it can be assumed this sub-unit is dissolved.