Sawajiri Erika (25) is making her return to acting with a double role in a mobile drama called “L et M: Watashi ga Anata wo Aisuru Riyuu, Sono Hoka no Monogatari.” This will be her first work as an actress since the movie “Closed Note” in 2007.

“Tenshi no Koi” director Kanchiku Yuri is directing the 12-episode series. The drama separately follows the love lives of two very different women, both played by Sawajiri. “L” is a cool working woman who shies away from love, while “M” is pure and cute but can be a little devilish when it comes to men.

Fashion magazines sweet and GLAMOROUS are providing the outfits for L and M, said to total about 50 in number.

The series will be distributed through the BeeTV mobile service between February 1 and April 9, 2012. New episodes are scheduled for release on Mondays, with each episode advancing both of the story lines. 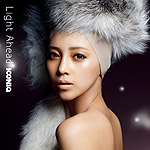