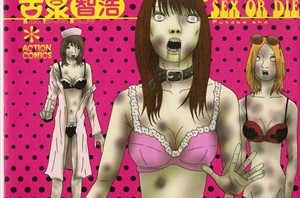 “Life Is Dead” is set in a city in the near future. An “undead virus” is quickly spreading, gradually turning the infected into the walking dead. Akaboshi is a young man who is unable to find a job, due to being infected with the virus just before graduating from high school. The story depicts Akaboshi’s final days, together with the people closest to him.

Director Hishinuma Kosuke is also handling the screenplay. Release is scheduled for spring 2012.