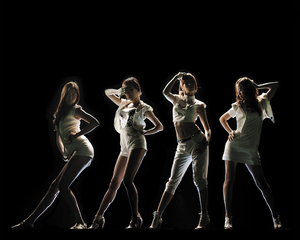 4Tomorrow (포 투모로우) is a Korean pop girl group created for the Samsung Tomorrow campaign. The group consists of 1 of 4 members from different girl groups: Brown Eyed Girls, KARA , 4minute and After School.
On December 25, 2009 the group reunited at Music Bank for a dance performance and a cover of Baek Ji Young's song "My Ear's Candy" with Taecyeon. At that time the group performed as Girls 4, instead of 4Tomorrow.