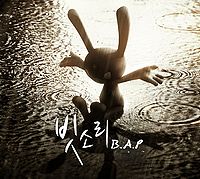 "Bissori" (빗소리) is B.A.P's second digital single. It was released as a preview for their second mini-album. Like their first digital single "Goodbye", the cover of the single features their mascot Matoki, specially member Him Chan's TATSMATO.