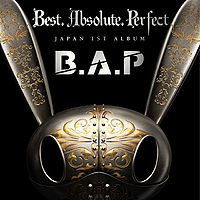 Best. Absolute. Perfect is the first Japanese album released by B.A.P. It was released in three editions: limited CD Only edition that includes a 48-page photobook and a MATOKI leather bracelet, a CD+DVD Type-A edition, and a CD Only Type-B edition. The album comes with one of seven trading cards and one of seven special tickets.

The album was originally scheduled to be released in November 19, 2014, but the release got postponed due to the members' decision to sue their Korean agency, TS Entertainment. Eventually, the album was released in March 2016, followed by B.A.P's decision to drop the lawsuit against TS.